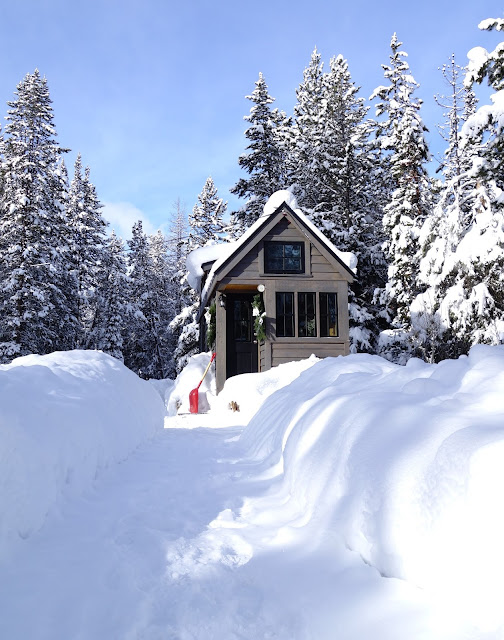 It's my cat's fault. No, really! My pipes froze, and it's all because of my cat.

First, before you get too worried, nothing is broken and my water is flowing again. Now this is my second winter in my house, so I do have some experience at this point living off grid and in this cold weather. And I've never had frozen pipes before. So here's what happened.

My water system starts will filling an internal tank. I carry water to it from a neighboring well, so there are no external pieces on that end of the system that could freeze. Unless my whole house froze inside. The water runs from that tank, again all inside, to my faucet. From there, water drains down the sink, down through the bottom of the trailer, to the outside. The then pipe turns and runs over to the edge of the trailer. Here, the water leave the pipe and drains along a channel cut in the dirt. Gradually seeping down the hillside behind my house and watering the trees and berry bushes that grow there. And yes, I am very careful to use nothing toxic in any way in that water.

As I said, this is not my first winter of using this setup. Last winter there was a stretch of days that hit -30F. and I was a bit concerned about things freezing up then, but never had an issue. The water was always warm leaving the house and so did not have a chance to freeze until after leaving the pipe and hitting the ground. Everything worked fine. This meant that when temps dove into the -20's a few weeks ago, I was no longer worried about this being an issue. 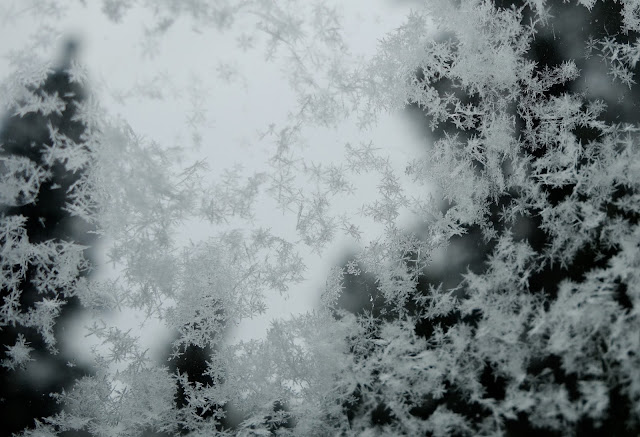 So imagine my surprise when I glanced into my sink one morning while brushing my teeth and saw water backing up in the drain! The lows during the preceding days had all be around -26 to -28, and the highs barely reached zero, so immediately I decided my drain must have frozen. But why? With the same setup as I had with slightly colder temps the year before, why would it have frozen this time? It only took me a few minutes of thought to arrive at an answer, my cat. 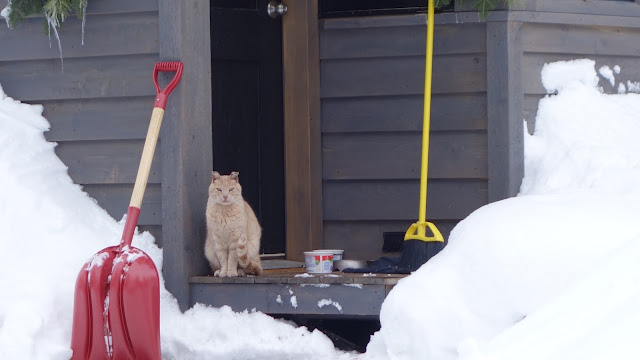 If you've read my recent posts, you know Manipi's story. Well he is still surviving and regaining health while living outside. His safe spot is under the house, where there is only one small cat sized hole open through the snow skirting. Otherwise, the base is sealed off with snow and ice, meaning that getting to the end of that drain was going to be a pain now! The rest of his free time he spends snoozing in his bed on the porch, especially if it's sunny, or relaxing in his cozy igloo crate house. But since he's almost always outside, his water bowl freezes up regularly. I'm home a lot, so this is fine. I just melt it out and put warm water back in every few hours so he always has something to drink. This is where the problem with my drain started though. 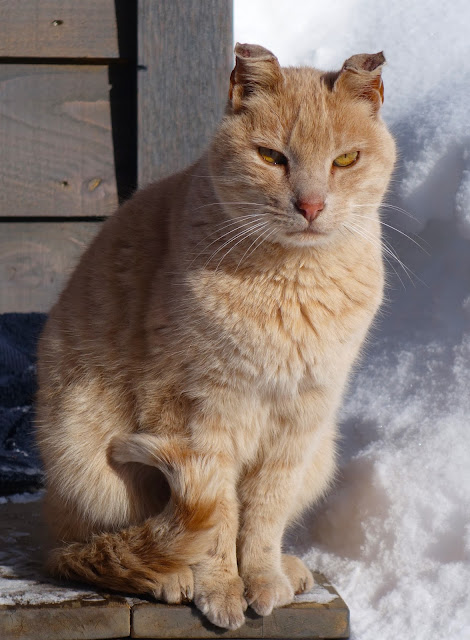 Before Manipi, water going down my drain was almost always from one of three things. Dishwashing, cooking, or hair washing and toothbrushing. Now all of these things tend to involve water somewhere between above room temperature to scalding hot. So, the water and all the pipes carrying it tended to stay hot or at least warm as it drained. Sometimes it would even melt a hole up through the snow several feet away from the end of the pipe, so I know it was moving a little ways before cooling to the point of freezing. But now I was doing something different.

I was often in a hurry or just being lazy, so when I'd pop one ice block out of Manipi's bowl to refill it with warmer water, I'd just let that chunk of ice sit there in the sink. No problem, right? As it melts, it'll just run down the drain. Well you can probably see where this is going already. A slow trickle of ice water does not flow several feet from the drain before freezing up when the outside temps are nearly 60 degrees below freezing! Instead, that trickle started icing up inside my pipe and I didn't realize this until the entire pipe was plugged and water was visibly backing up in my drain. Thankfully, because this happened slowly from that drip, nothing broke when it did freeze the whole way. Had the pipe been full of water and then froze, the expanding water would have split everything apart. 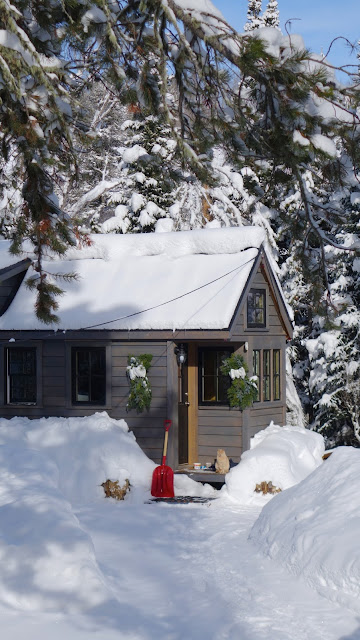 Remember my snow/ice skirting? It was now in the way of getting to the end of that drain pipe to do anything about the freeze up. Fortunately, I have a strong and handy friend who come over and busted a hole through my skirting and opened up the bottom of the house. Then he put a space heater under there and baby sat it when I had to head off to work. After about 5 hours the backed up water started flowing again. He even built me a little wood cover for my drain so that snow could be packed around it for insulation without plugging up the drain, filled the hole in the skirting back in, and left every thing in perfect order before I got home from work. It really is amazing to have a friend like that around! 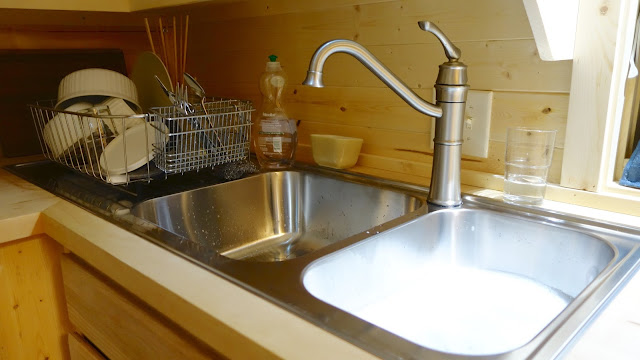 So problem solved. Well, not quite. I had decided to be sure I didn't put any ice blocks in the drain and was very careful to only run very hot water down it. But I was still busy, working everyday and some double shifts. I wasn't home long enough to do much of anything there except sleep a little. Meaning only very small amounts of water of any temp were going down the drain. And, the temps were still well below zero. Two days later, what do you know? There was water backing up in the sink again.

I, being very brilliant, decided the drain must have re-frozen. In retrospect, I doubt it had ever thawed the whole way out. I think the space heater had thawed the edges of the ice blockage out enough for water to drain, but left a core of ice in the center. And over the next few days of continued cold temps and only running a little water down the drain, the core of ice refroze the whole thing. 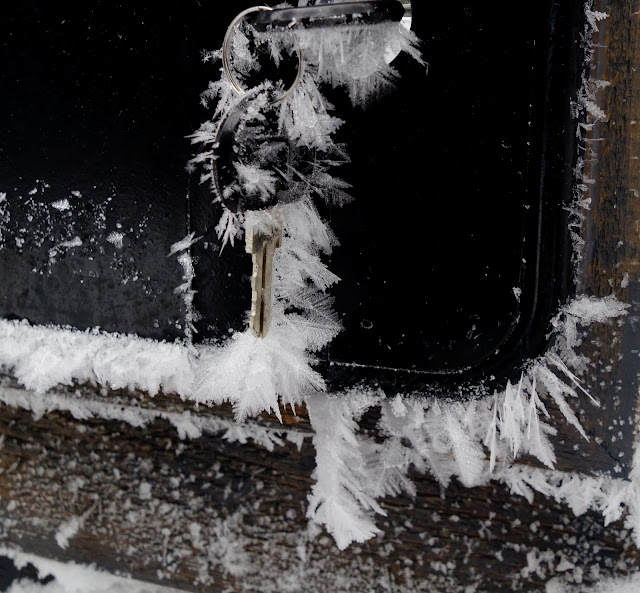 Since I felt kinda stupid to be in this predicament to start with, I didn't want to bother my friend for help again. So, I re-dug out my skirting myself. Much easier than the first time around thanks to the ice already being broken up. As I crawled down to peer through the hole and try to decide what to do next, I had an idea. When my house arrived after purchase, the pipes were wrapped in heat tape. I've never used it because my drain had never had a problem before, and I do not have enough electricity to power it adequately with my off grid setup. I figured that the heat tape might be the best way to thaw the pipes the whole way out though. So I used my generator to plug the heat tape directly into and turned it on. After letting this run for almost nine hours, I could not feel any ice in the drain any more when I reached into if from the bottom to check.

I'm not sure if you quite get the picture of what is going on here if you have never tried to reach plumbing underneath a snowed in trailer yourself. Imagine laying down full length on a pile of snow and ice. Now stretch out and twist you shoulder so you can reach up and under the trailer frame. This puts your cheek right on the ice and you can feel whats going on, but not see anything at all because your face has to be turned the other direction in order to reach the drain. It was rather comical looking I'm sure had anyone been watching!

Now the water was flowing again. The heat tape did quite a good job. However, I was concerned about  there still being an ice core in the center that would freeze everything up again, like the first time around. So I capped off the drain and boiled two large pots of water. I poured them down the drain till I could see the hot water backing up in the sink. I left everything sit this way for about fifteen minutes to give the hot water plenty of time to dissolve any remaining ice. Followed by repeating that crawling sideways under the trailer edge maneuver to un-cap the the drain. All the hot water flowed out and there seemed to be no evidence of remaining ice. 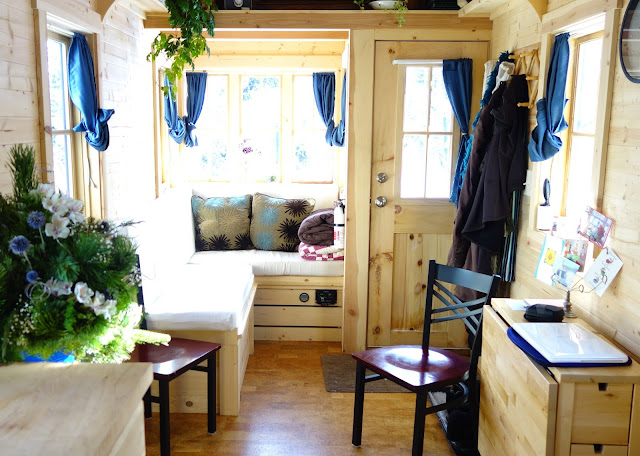 This seems to have been totally effective. Nothing has refrozen. I am very careful to not leave ice blocks melting in the sink for any reason now. Hopefully my experience with this will help someone else avoid this problem with their house. Because while nothing was damaged and things could have been worse, it was a real pain, and I don't recommend doing this to yourself if you can avoid it! And I suppose it really was my thoughtlessness, not my cat's fault that I had the issue in the first place. I hope all your houses are handling whatever winter weather you have right now!