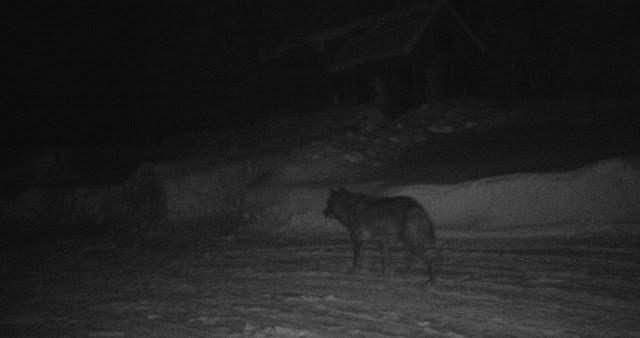 A couple mornings ago, when Burley and I woke up and first went outside, I saw new tracks in the snow. One advantage of getting more snow almost every day, is the ability to easily pick out and follow fresh tracks. Burley has a pretty huge foot print for a barely 50 pound dog. Much larger than many dogs his size, and this serves him well for living in deep snow country as those big feet act a bit like snowshoes. But at first glance I knew these tracks were not Burley's. They were two to three times larger than his feet. My first thought was that our resident mountain lion had visited again. But a second glance let me know that they were not cat tracks. Just like a house cat, mountain lions can retract their claws, so their paw prints just have a pad and toes, no nail print visible. Each of these tracks I was looking at had a very clear nail print at
the end of each toe. Wolves, like dogs, can not retract their toenails, so I was pretty sure it was a wolf track. Though there was a small chance someone's dog could have walked through. But that would be unlikely since very few domestic dogs have feet this large, and there are no neighbors close enough to us for another dog to just wander over.

So I decided to check the game camera. Again, I don't do this every day, but it has been fun to have it there to check every week or so just to see what might have walked by when we were not looking or were sleeping. And sure enough, we had a wolf on camera. He actually hung out in the yard/driveway for almost an hour from the time stamps on the photos.

I'm fairly sure this is a solo wolf who had been living in the general area for a few years at least. I've seen his tracks around here over the years and know a few folks in the area who have seen him, and he's always alone. I'm not sure why he's not with a pack, but he and his tracks are always solo. This is a bit unusual as most wolves do live and travel in packs of which I've seen or crossed paths with several times as well. Maybe sometime he'll cooperate and I'll see him in the daylight and get a real clear photo. 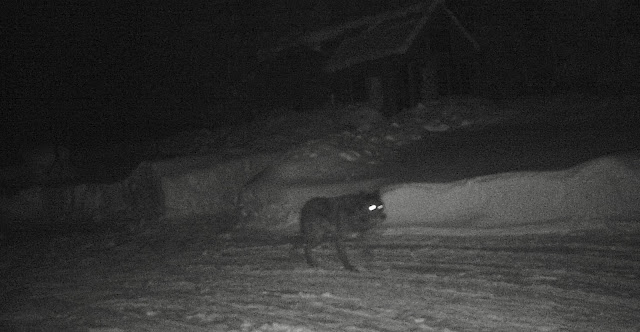 That is Fy Nyth right behind the snowbank behind the wolf in case you can't tell. :) The game camera doesn't light the scene very well that far back at night. From the tracks and the photos, I don't think he ever came up to the house or porch. Burley does wake me up to tell me about wild things that do that at night. So far it's been things like a bear or a porcupine. I'm totally fine with alerts to things that are actually inches (because of course our porch is quite small) from our door. But he usually ignores wildlife that walks further out through the yard at night. Which is also great as that happens most nights with at least a fox or something and I don't care to be awakened every night. So we both slept soundly through this visit. But it was neat to not only know the wolf came by thanks to his tracks, but to have some photos documenting that as well. In this last shot, you can see he's looking directly at the camera. The "flash" is almost totally invisible unless you are looking directly at the camera when it's taking a picture, then there's a slight flicker visible. The photo before must have caught his eye, and for this one he was staring right at the camera. 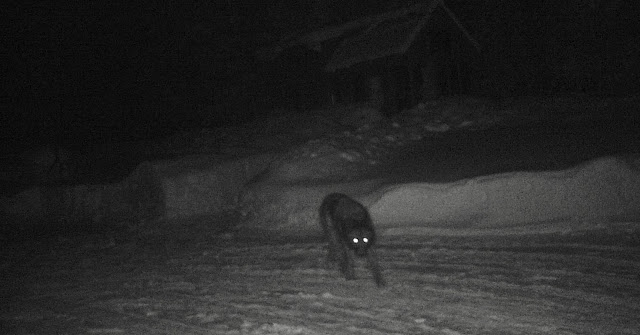 So there you have our latest big visitor, a Canadian Grey Wolf in front of Fy Nyth!