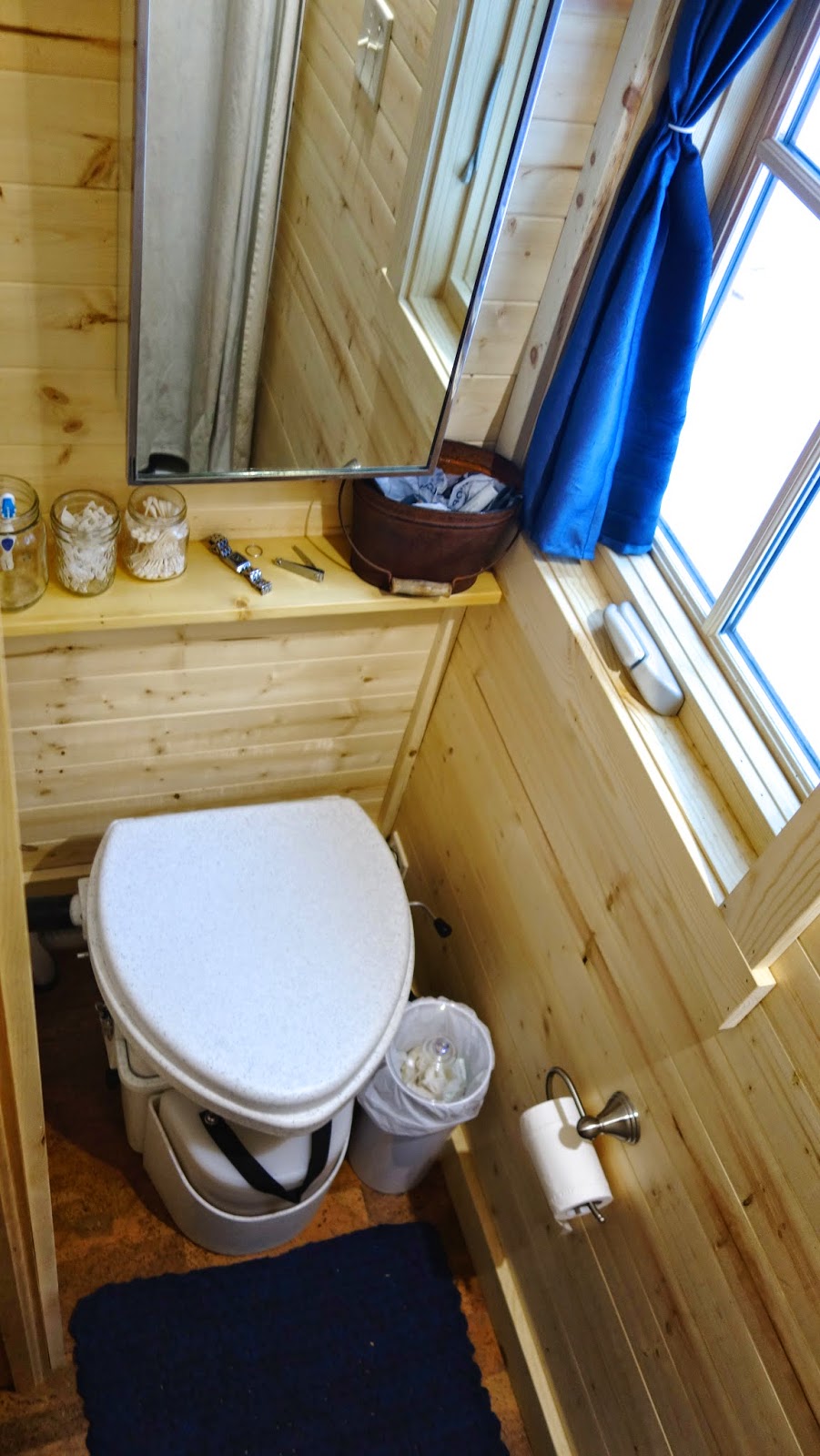 What do you do for a toilet when you are off grid? How does a composting toilet work? Isn't it gross?  Does it smell? Isn't that weird? Etc.

Like most people who have one, this is something I get asked more questions about than almost anything other single thing. My toilet. So hey, if discussions about things like poop scare you, stop reading right now. On the other hand, it's something we all create daily and most of us spend very little time thinking about what happens to it afterwards so reading on may be worth your time.

There are several levels of complexity to composting toilets. Basically they all allow you to turn your waste into something useful or at the very least, non toxic. This is opposed to a flush toilet that uses a lot of good water and creates sewage. The simplest composting toilet is something like a seat over a 5 gallon bucket to which you add a handful of sawdust after each use and empty as needed. This is certainly the least expensive option. Then there are the manufactured ones that for the most part add a way to separate the liquids and solids. Keeping those two separate is very helpful in eliminating odors. These also move you from the price range of free or a few dollars to about $1000 for the least expensive model.

My toilet is a Natures Head, one of the least expensive of the more expensive models. So far at least, I really like it. Here's the basics of how it works. As you can see from the above photo, looking down on it, there is not a lot of difference in appearance from any other toilet you are used to. Below is a shot with the seat up. Looks kind of like an RV or airplane toilet inside to me. But nothing gross or weird.

The seat is comfortable and you sit down just like on any toilet seat. If you just need to pee, do so and it will all drain into the liquids tank. I hear if you are a guy it is easier to do this sitting down just because of the splash likelihood with the hard plastic sides. Now being a woman, I don't have personal experience with this, but I hear that if you don't mind a quick wipe up afterwards, you can feel free to stand too. 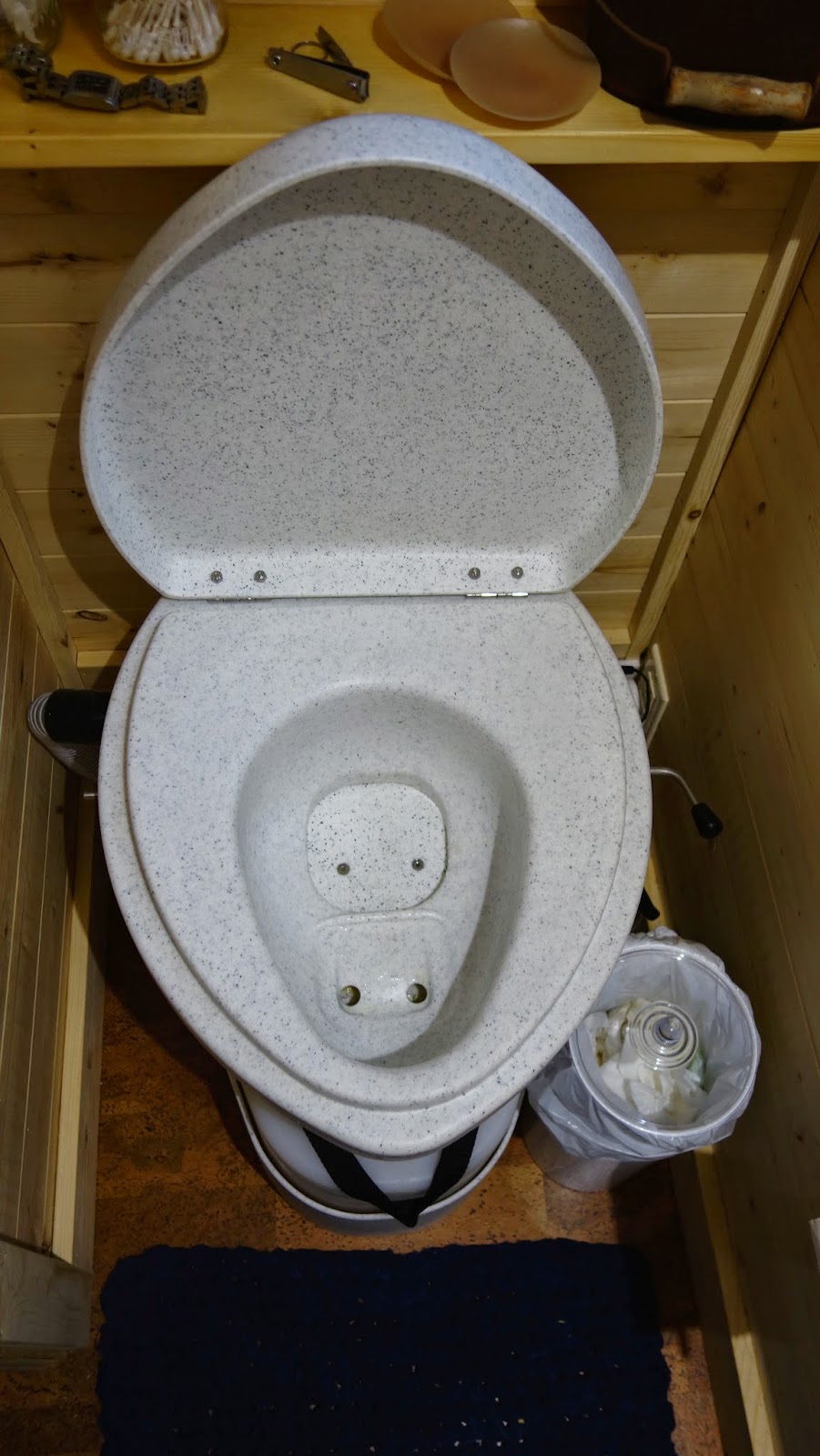 If a number two is on the way, after sitting down, flip that little handle you see on the righthand side above. This will open the trap door, which you can see below. Almost anywhere you can comfortable sit, this will direct anything solid right down into the solids tank. What if you do both at the same time? Unless you are scooted way forward or backward on the seat, both liquids and solids should still end up in their respective containers. There is a potential I have found for a few drops of pee to drip into the open trap door though. This I do try to avoid as getting the two together makes a smelly combo. Shifting just slightly on the seat fixes this and will soon require no thought at all. 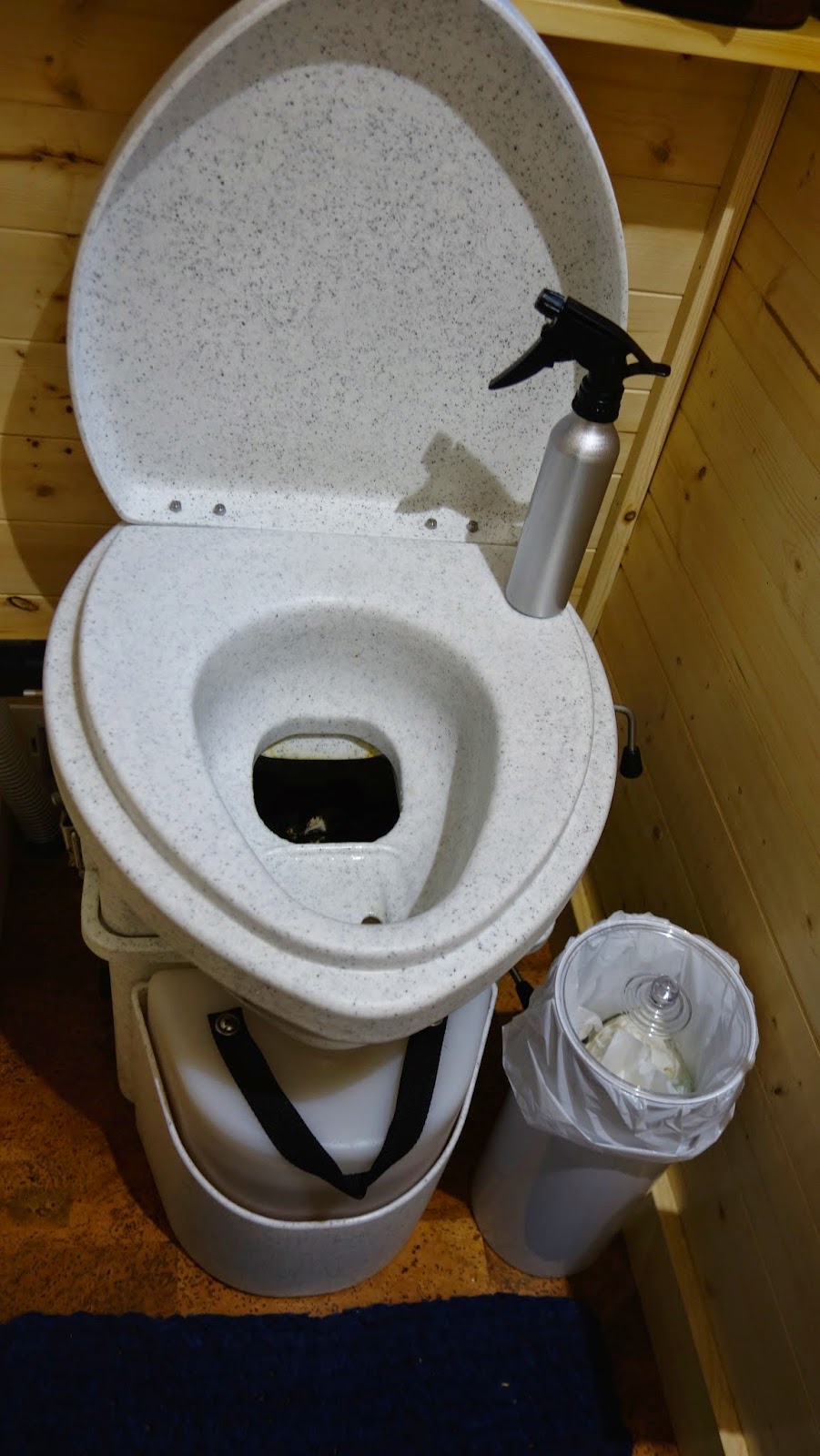 This is after more than a month of solid use, and while you can't see into the tank real well, it's like that in person too. Just looks like a pile of dirt and has a slight earthy smell if you are trying to sniff it. Similar to getting your nose close to the potting soil in any of my house plants. Not strong or in any way unpleasant, even with the trap open and while trying to sniff for odors.

The spray bottle has water with a little vinegar in it. A spritz or two into the bowl when you are done helps keep everything nice and fresh. The spray bottle pictured here was a dollar store one, but did not always spray well. I now have one that will spray while held in any position including upside down, and that is kind of handy.

Can you put items X, Y, and Z in here? Yes, you can put anything in there. But some things won't decompose or at least won't do so quickly. Feminine products I still put in the trash just as I would when using a flush toilet. Toilet paper can all go in there, but just because I'm a girl and use more than most guys would, and I don't want to fill it up too quickly, I have started putting most of it in the trash. I go by a rule I heard from someone else. If you need to open the trap door for anything, then the paper goes in there. Otherwise, it goes in my little sealed trash can (it was sold as a holder for spare toilet paper but makes a great little trash can with a lid for a tiny bathroom) which is obviously not far away. 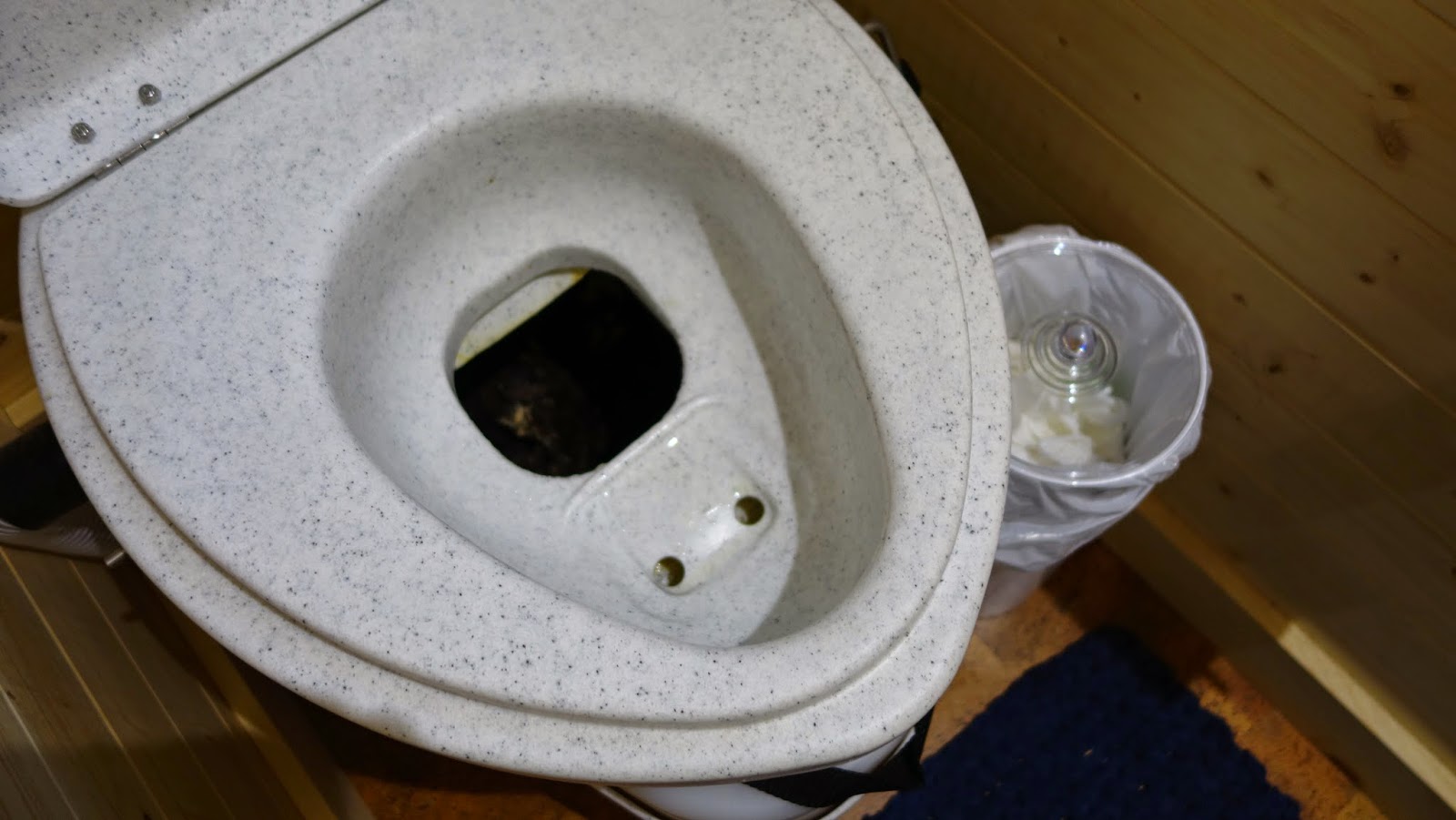 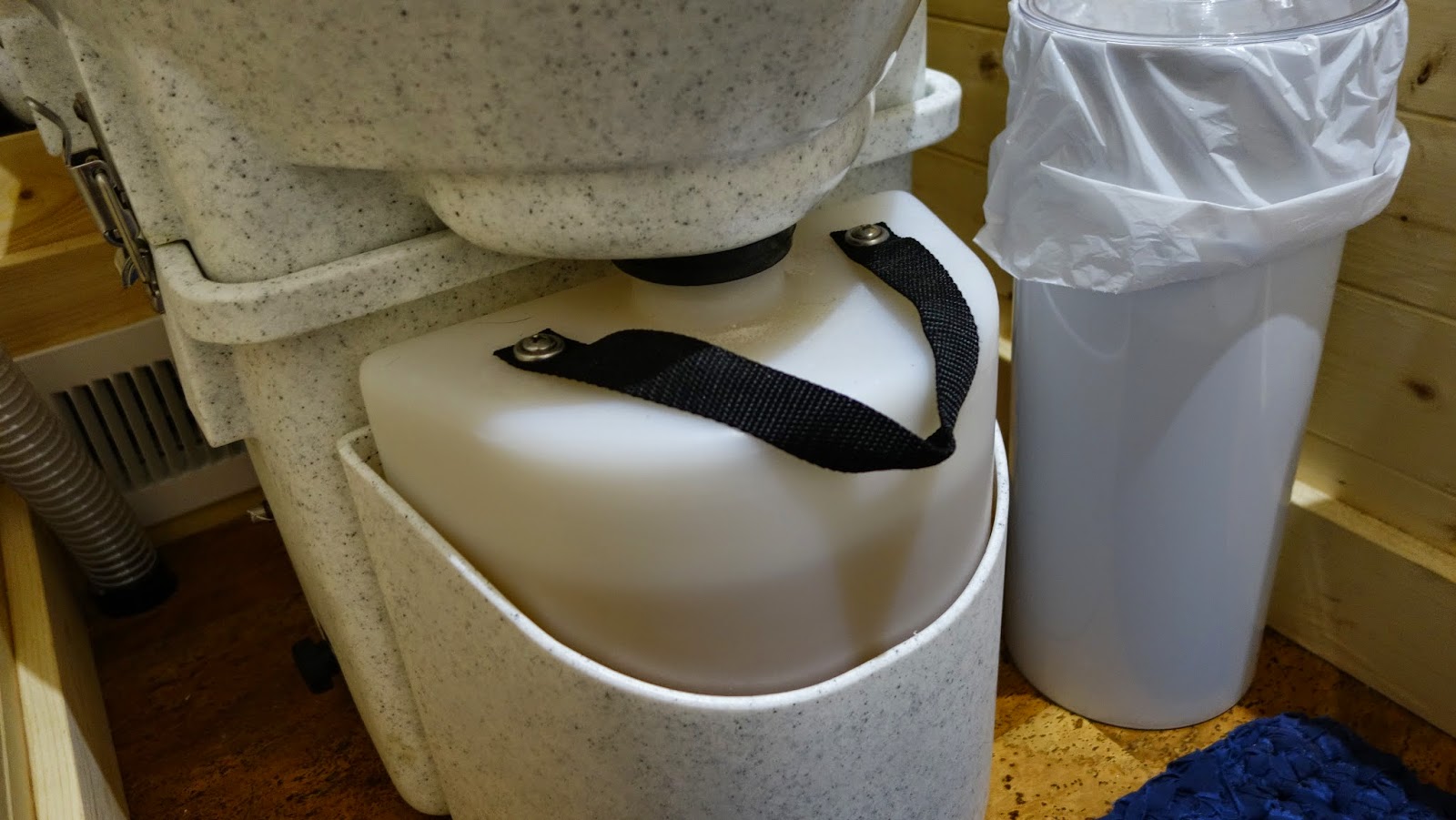 Here you can see the liquids tank. It's close to needing emptied in this shot. Do pay attention and empty it before it's full to the brim. Twice now I've kind of forgotten about it and while it doesn't leak thanks to that seal, when you do empty it, you'll have to clean up the overflow. Which should all be contained in the bin the tank is sitting inside. But still, empty it before it's overflowing, and life will be easier. ;)

As far as where everything ends up? Diluted urine is a great fertilizer. If you live in the middle of a city, there may be issues with this, but in a rural area, water your landscaping with it. I haven't had to empty the solids tank yet after almost two months of use, mostly by just one person. And it's not looking like I will need to for a few months. But when I do, I plan to start a larger outdoor composting bin to finish it off and eventually use with plants as well.

Well that's all the info I can think of off the top of my head. Feel free to comment with any more questions and I will do my best to respond.

In case you are interested in a similar set up for your tiny house or RV, following are links to some of the items I use and describe in this post. If you buy them through my link, you will be helping me pay the bills here in my tiny house!