I spend a lot of time in my garden. And my house is so secluded in the woods here that no one can see the yard or garden. So I often work in the buff. Well today, as I was bending over transplanting some kale, my phone which was laying on the ground a few feet away, rang. I picked it up and as I answered, turned around. There was a big bull moose about 10 feet behind me!

I think we both startled each other. My guess, since there is no way he could have not seen me as he walked up the lane, is that he wasn't sure (moose have poor eyesight) what kind of animal I was. So he was on his way to investigate. It's amazing that something that large and heavy that can leave deep prints even in fairly dry dirt, can walk up behind you that quietly!

I retired to the porch both to get my camera, and to be able to get out of the way should he get upset. He, also startled, ran toward the fence that circles my little clearing. The only opening was the lane where I, clearly in error, thought nothing would walk in while I was home and working outside. He walked around the fence line till he got back to the lane and then trotted off.

Above you can see him following the fence behind my chairs and swing. 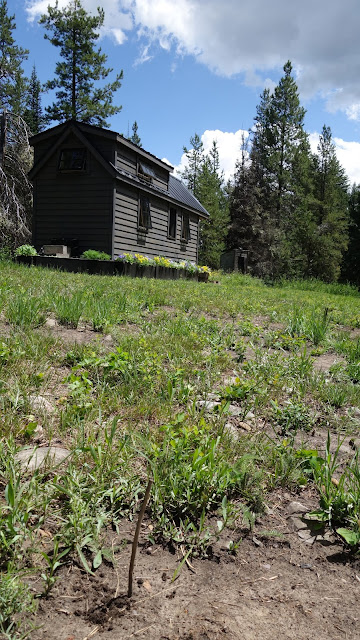 Here you can sort of see the two sticks I stuck in to mark where I was standing (the near one) and where he was when I turned around (the far one, almost on the right hand edge). His location was super easy to mark because he left a set of super deep tracks when he jumped sideways when we scared each other. In the photo below you can see those sticks a bit better. 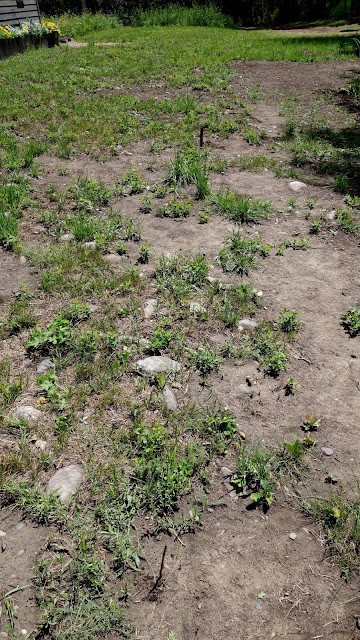 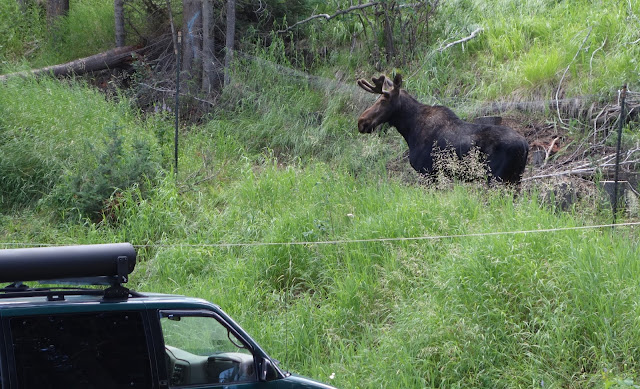 Here he is making his way in front of my van, and below, he made it back to the lane and headed out. Since he was not aggressive, this was kind of a cool experience. I've been close to several moose, but this might have been the closest, and for sure the only time one walked up behind me unawares! It would have been neat had someone else been there with a camera to capture both of our expressions when I turned around and realized he was there. I may keep the fence/gate up across the lane now if I'll be home working for a while though. Moose can be very aggressive.