Planting a Tiny House Garden with No Frost Free Summer 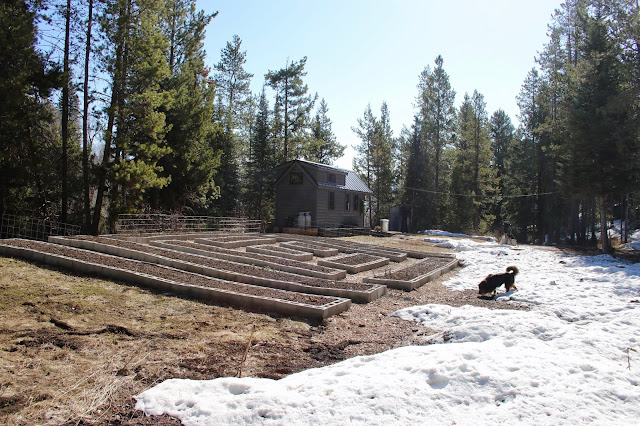 Planting a garden in a mountain corner of Wyoming where there is no official growing season... As in most areas have a "last frost date" and "first frost date" and in general (though not always!) you can pretty much count on plants growing with no frosts and freezes in between. If you don't know what your growing season is, you can put in your location in this handy little calculator - https://davesgarden.com/guides/freeze-frost-dates/index.php and it will tell you some general info. Like in my parent's area, they generally have a frost free growing season a little over 150 days long so they can plant things that take up to that many days to mature without freezing. But in my area, there's always a chance of frosts or freezes all summer. So really what I grow is kind of what many people would call a
winter garden. That mostly includes plants that can handle freezing. As well as my frost cover setup to help protect the slightly more tender things and from the colder freezes.

Above is a photo from April 22, and this is what the garden beds looked like. Almost bare of the winters worth of snow all except for one little corner of the last bed. Though obviously much of the clearing was still buried. 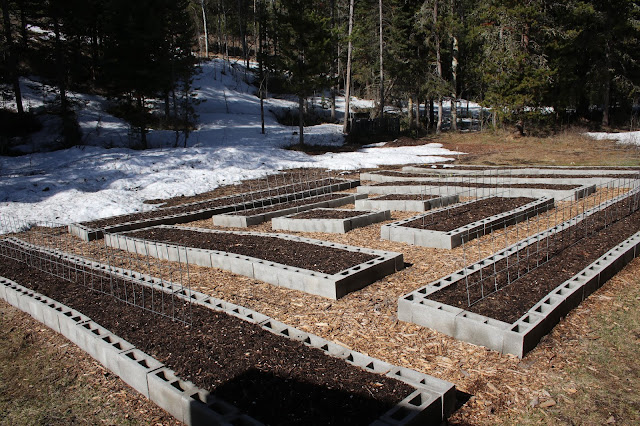 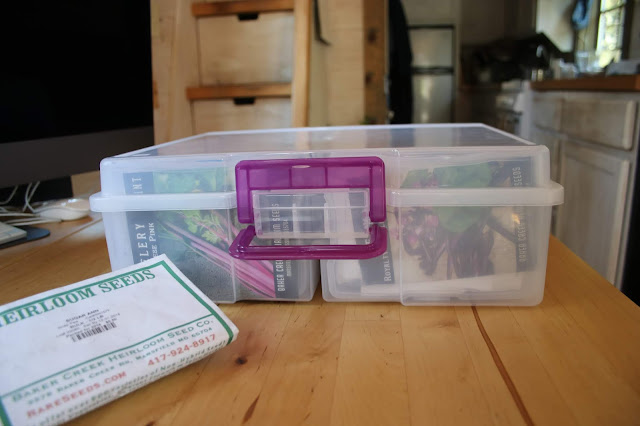 So since I'm not waiting for a last frost date, once the soil is bare and defrosted, I start planting. The beds were all mulched/top dressed with my compost last fall and should be full of nutrients for growing delicious and healthy food.

After years of keeping all my seeds, of which I have a lot of packets since I like to grow many colors/varieties of almost everything I plant, rubber banded together by kind and stashed in a cardboard box, I saw someone else (I don't remember who and since getting mine have seen a bunch of folk going with the same setup) using this handy thing. It's actually designed for storing photos, but it works really well for seed organization! Find your own here if you have a lot of seeds (or photos!) to organize too - https://amzn.to/2T6IZGM 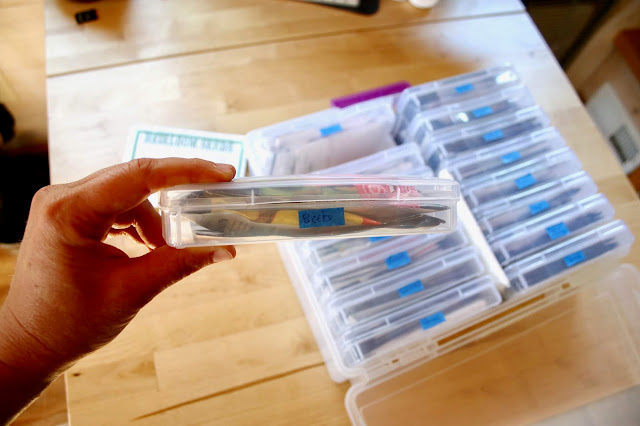 Now all those varieties are tidily in the separate little boxes and organized by kind of plant. For example below you can see 5 different varieties of beets I plant along with their little "Beet" labeled box. 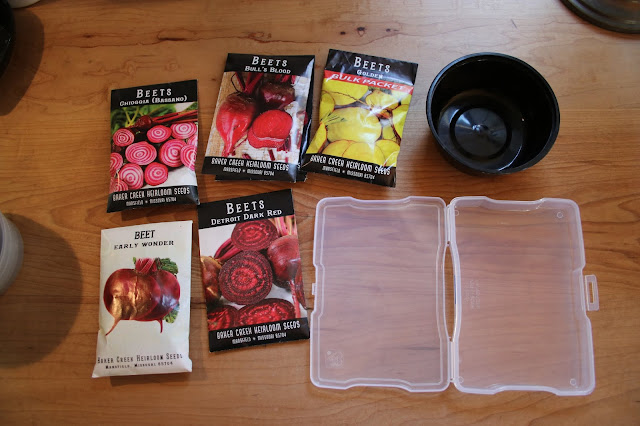 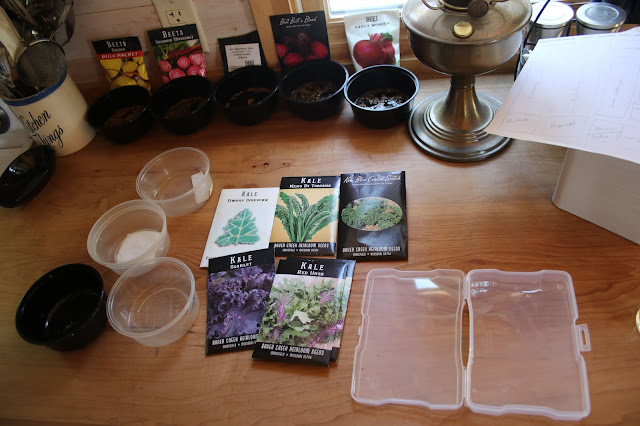 Or kales varieties and their box, etc. 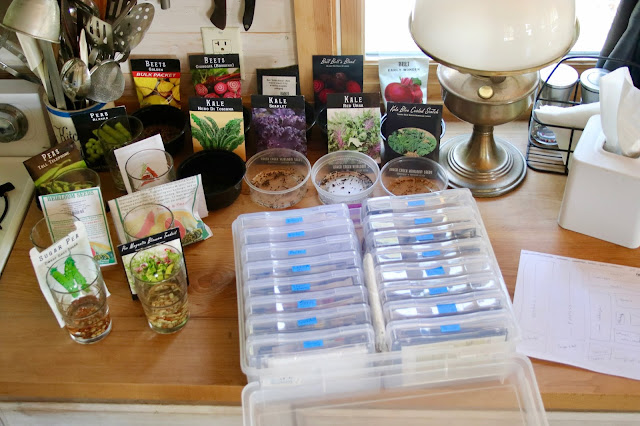 Now one of the things I do to help seeds get a little head start is to soak some of the seeds in a water for 2-8 hours before planting them. This works really well for things that have large seeds like peas and beans. This year I tried doing the same thing with beets, kale, and chard. That I found to be less ideal as with their tiny seeds, being wet made them really hard to separate out as I planted. They all tried to stick to my fingers and were hard to drop into the ground. So that is an experiment I won't repeat. But for the larger seeds it does seem to speed up germination. And since time is so short here, that's a good thing for me! 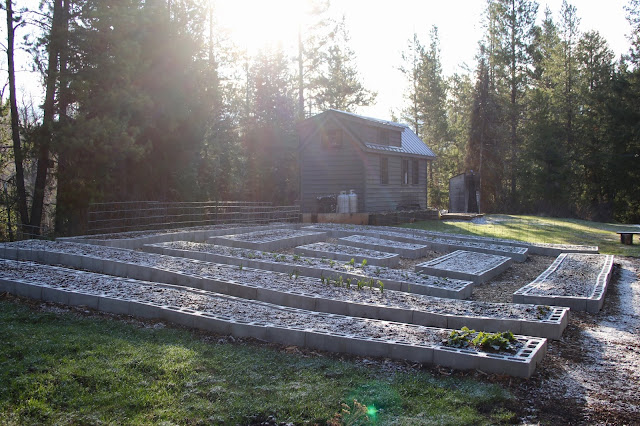 By May 4 when the above photo was taken, almost the whole garden was planted. Minus potatoes and cabbage which I didn't get in till the next week. But that morning we got a little fresh snow. Nothing had popped up through the ground yet other than the perennials like rhubarb and horseradish, but those little seeds were uncurling and starting new life underground. And the day is snowed the first asparagus shoot popped out! Now there are hundreds. 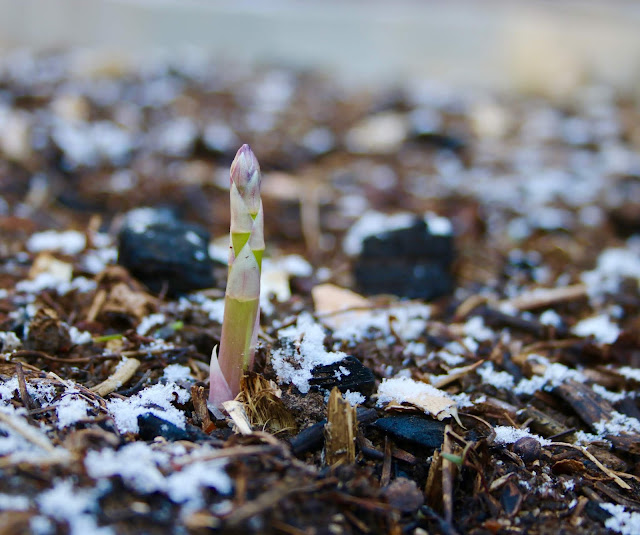 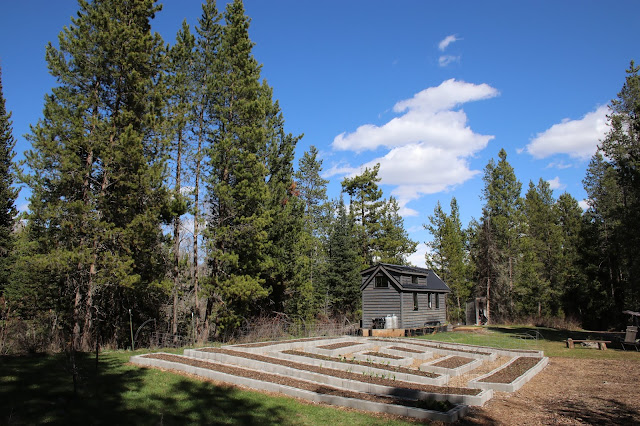 Then there were a few days of sunshine though the nights were still very cold and into the teens. So as soon as the first little pairs of leaves started to emerge, the frost covers went up to help protect them. And have been in use most of the time since. I use the heaviest frost cloth they make which gives me about 10 degrees of frost protection. Though everything planted can handle freezing, temps into the teens certainly slow down the growth of tiny baby sprouts so if I can keep them just a little warmer, it helps keep growth a little more rapid. 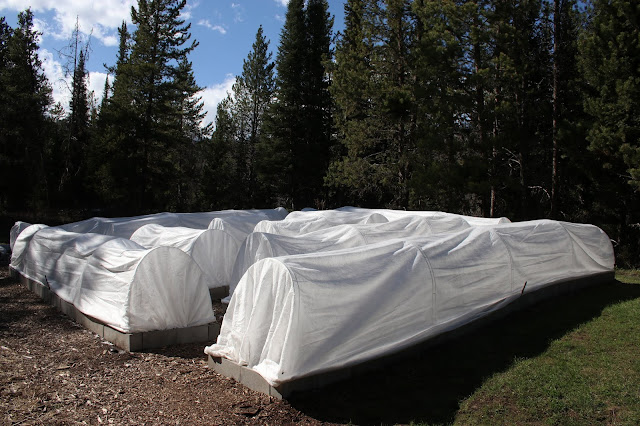 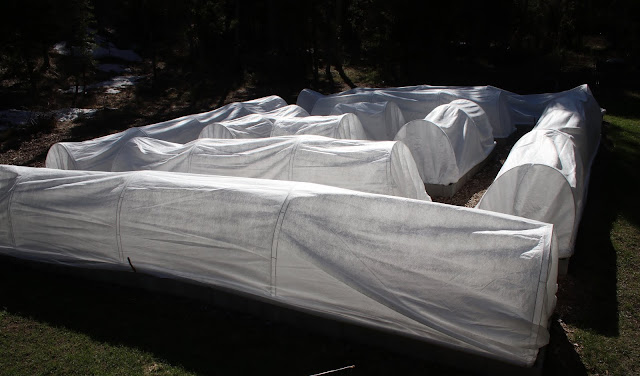 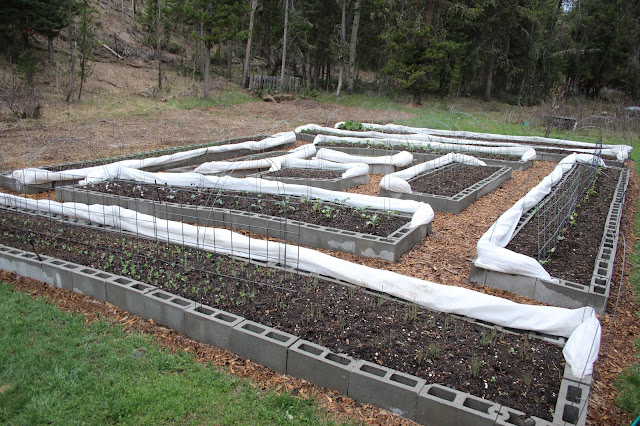 And if the days are warm, the covers all get rolled up to let in more light. Those thick frost covers provide about 40% light transmission, so that does make a difference. Almost every night they've been back on though. And this is something I do all summer long. Generally covering everything any time the forecast calls for temps in the mid 30's F. or colder in the closest town as I am usually several degrees colder than there. 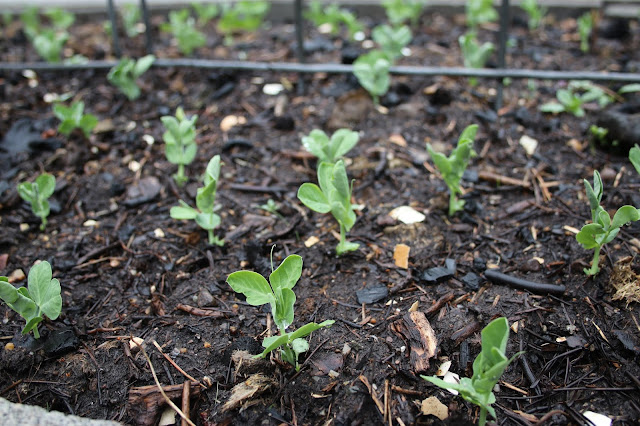 So far everything is thriving! Above are little pea shoots springing up. Below are some of the multitude of asparagus shoots I have now, even after harvesting some. 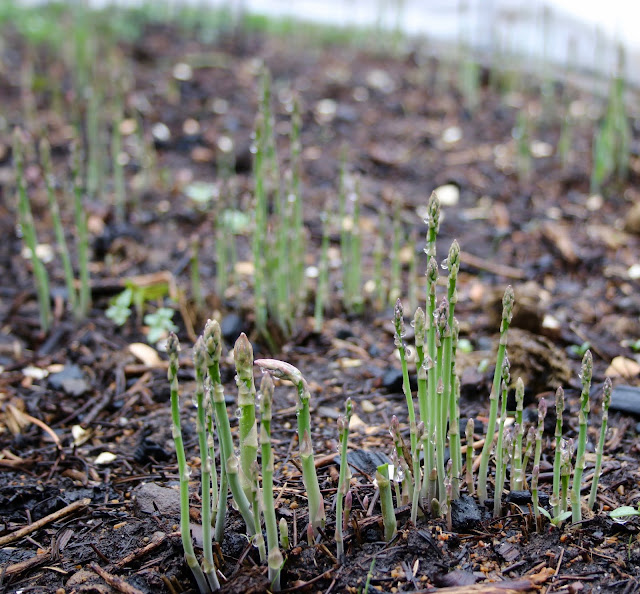 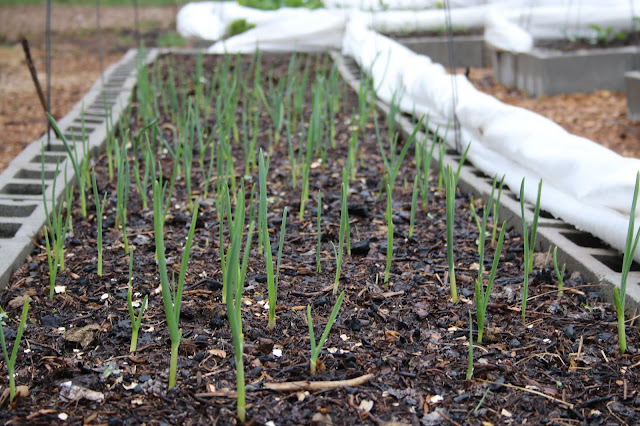 The garlic which was planted last fall is looking good and the strawberries are pushing out beautiful new leaves. 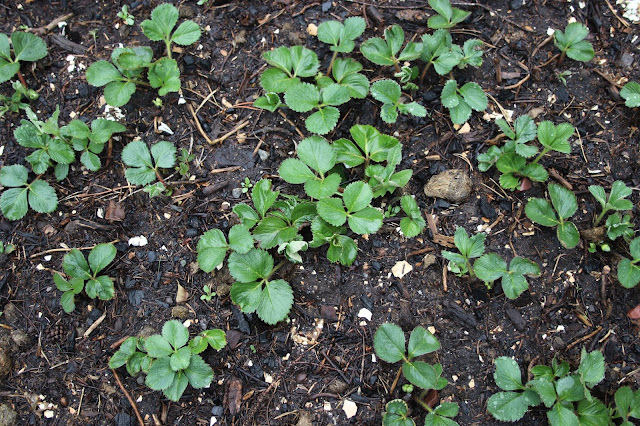 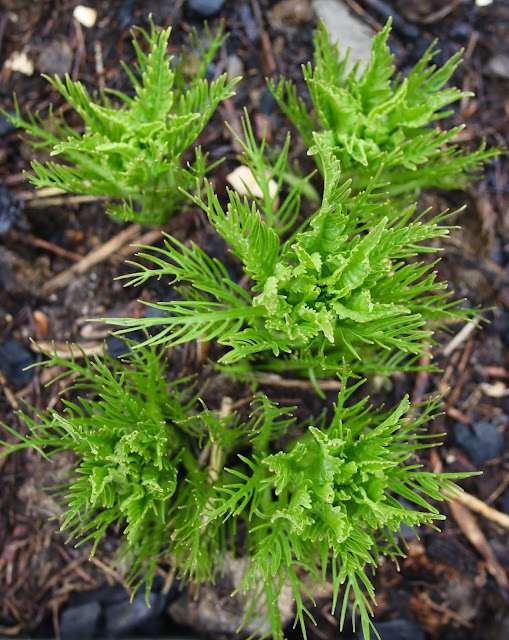 Horseradish above, and rhubarb below are bother getting large! 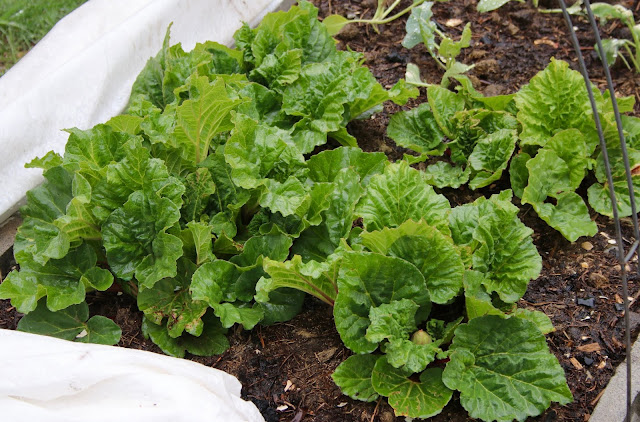 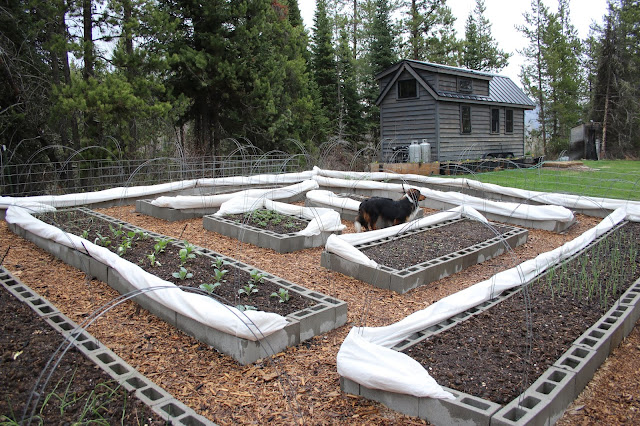 And almost all the seeds for everything else have started to send out little bits of green. Though looking over the whole garden, many are still way to small to see. 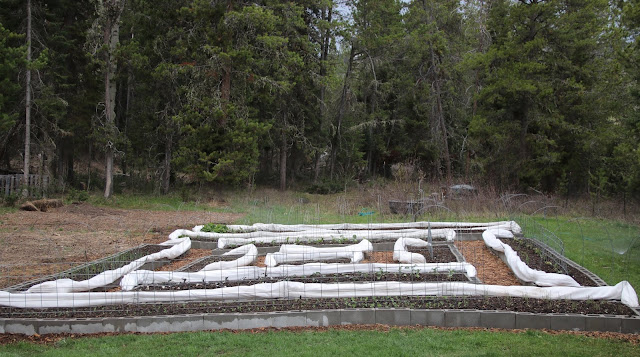 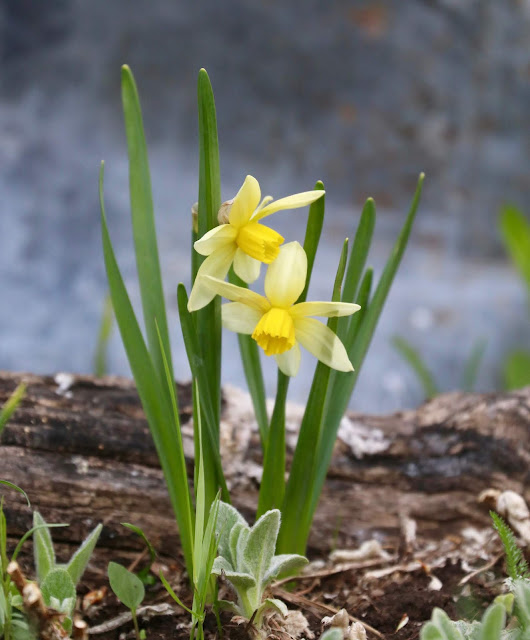 If you want to compare my area and where the spring is with yours, here is my first two daffodils open for the year. They just opened today. 😊 So I'm at approximately whatever stage your area is when the first daffodils open. The whole clearing is now free of snow, though I can still chuck a rock from the house and hit a snow pile in the woods that's several feet deep. That's close in case you're wondering, since my throwing abilities are not great.

The whole garden is planted and in a few weeks should be looking a lot more green. What are you planting or what do you already have growing right now?